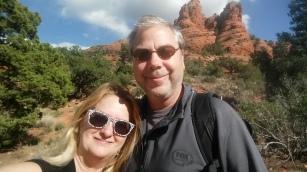 Don and I were taking our first trip since I had gone back to work, the new deal Don called it, meaning we would both work full time while making the most of our limited time together.
We had chosen to visit Sedona Arizona.    I was in search of the magical, mystical vortex areas of Sedona where it is said the earth produces a powerful healing energy that brings wisdom, energy and peace to those who experience it.
My recent return to work had left me feeling disconnected from my family and friends, I was to busy to write and sad being separated from Don. I was anxious to experience some positive energy, and once I found it I planned to take in as much as possible.
I wondered if it was a temporary feeling like filling a gas tank or if it would be more permanent.      Don being practical went along because he wanted to see the twisted juniper trees that are prevalent in the vortex.
We were staying at The Hilton Sedona Resort, set in the red rocks, the view from our room was so beautiful that sitting on our patio alone would have made for a perfect vacation, but I had a vortex to chase, so we studied the local maps and made our plan.

We started in Sedona where we planned to take the vortex by storm. We were going high into the rocks with Pink Jeep Broken Arrow Tour. The jeeps may have been pink but they were not at all girly. Those rugged vehicles drove off road up and down the rocks, a few times we found ourselves looking straight down the only thing that kept us from falling out was our seat belts and the tight grip to the rails. Our views from submarine rock, chicken point, Chapel Rock and Rock of Gibraltar were breathtaking. The valley was deep red when lit by the morning sun, everywhere I looked there was the majestic beauty of the rocks and mountains beyond us.

Our tour guide suggested we check out the rocks at The Airport Mesa where the vortex powers were said to be exceptionally strong. I struggled with the first part of the climb and at one point thought about staying at the bottom while Don climbed, but then I remembered a pact I had made with my brother Michael shortly after my moms death,to get back in shape in her honor, so I continued with that promise in the back of my mind.
Don walked in front of me and patiently pointed out every foothold, I thought about how exhausting it must be for him to not only climb each step but to then reach out and help me up.
When we reached the top the sun was getting low and the valley was bathed in reds and golds the sky was smoldering with the last colors of daylight.      I felt at peace feeling I kept a promise to my brother and mom by not staying at the bottom, It was an amazing view. But I did not experience the magical vortex.
After our climb we went to the Mesa Grill at the Sedona Airport where we watched turbo prop planes land and take off as we drank dark beer while watching the last glimpse of sunlight disappear under the horizon, before heading back to our hotel.

I slept well that night dreaming I was standing on one of the beautiful red rocks, I had found the Vortex in my dream, and I was filled with joy, energy and happiness. I woke up the next morning and could not wait to get back out.   After breakfast we drove to Bell Rock.

The hike up Bell Rock was Less challenging, we passed several hikers and cyclists on the way, everyone seemed in good spirits, good sign I thought, no one is leaving looking pained or unhappy, surely the inner peace I was seeking would be at the top of this beautiful Rock.       We made our assent stopping for photos, and occasionally to check out a twisted tree or the way the sun or shade was catching the light off the rocks. I placed my hands on the rock once or twice hoping to catch some energy, Don would stand by wondering if I would lift my hands away with the answers to all universal questions, but instead I would step away and shake my head, “nothing”. So on we would walk, holding hands, talking, laughing about what the energy would feel like and wondering if it would ever forever change our lives. We stopped close to the top and sat taking in the majestic beauty of the red rocks. The bright sun shown warming our faces making us feeling as though we had found a piece of heaven, but I never felt the vortex. I guess I’m not one of those people who get to feel the energy I said sadly. Well Don answered the twisted trees were pretty cool, though I think they are starved for water and they twist around looking for that last drop, most of the twisted trees are dead or dying.

On our climb down we met a lost family, we had been told it was easy to get confused between the paths, Don helped them figure out the correct path and gave them water, they thanked him and even offered to pay for the water bottles, no worries was Dons reply you have just helped to lighten the load of my backpack by taking some of the water.

Don helped me navigate every step, reaching out his hand to assist me with the taller drops, at the bottom we stopped to rest.
I closed my eyes for a moment and thinking about the sights and feelings of the last 2 days. “I found the Vortex.” I said out loud, “Here on the park bench?” Don asked. “No silly,” I laughed, “it was there in beauty of the rocks, and the peace of sitting at the top and seeing Gods beauty in front of us, it was meeting challenges that I was scared of at first but worked through, it was in those people you helped on the path. It was in you everytime you held out your hand to help me.” Don laughed at me, “You sound like Dorothy when she woke up from her dream in the Wizard of Oz.”
There was another twisted tree near the bottom as we got up, I looked at it and realized this is what happens to people when they don’t stop to drink in the joy and beauty of life, we twist and turn and end die with our lives nothing more then an odd curiosity.

I had felt that energy in all the the places we had visited together but especially in natures masterpieces. There is nothing like the beauty of sunshine coupled with love, kindness and compassion to help us find inner peace.

It was time for me to go home while Don stayed to work, and while I was sad that we would be apart for the next 5 days, I was planning to squeeze as much adventure as possible into every moment of our new deal.

2 thoughts on “Chasing The Vortex”