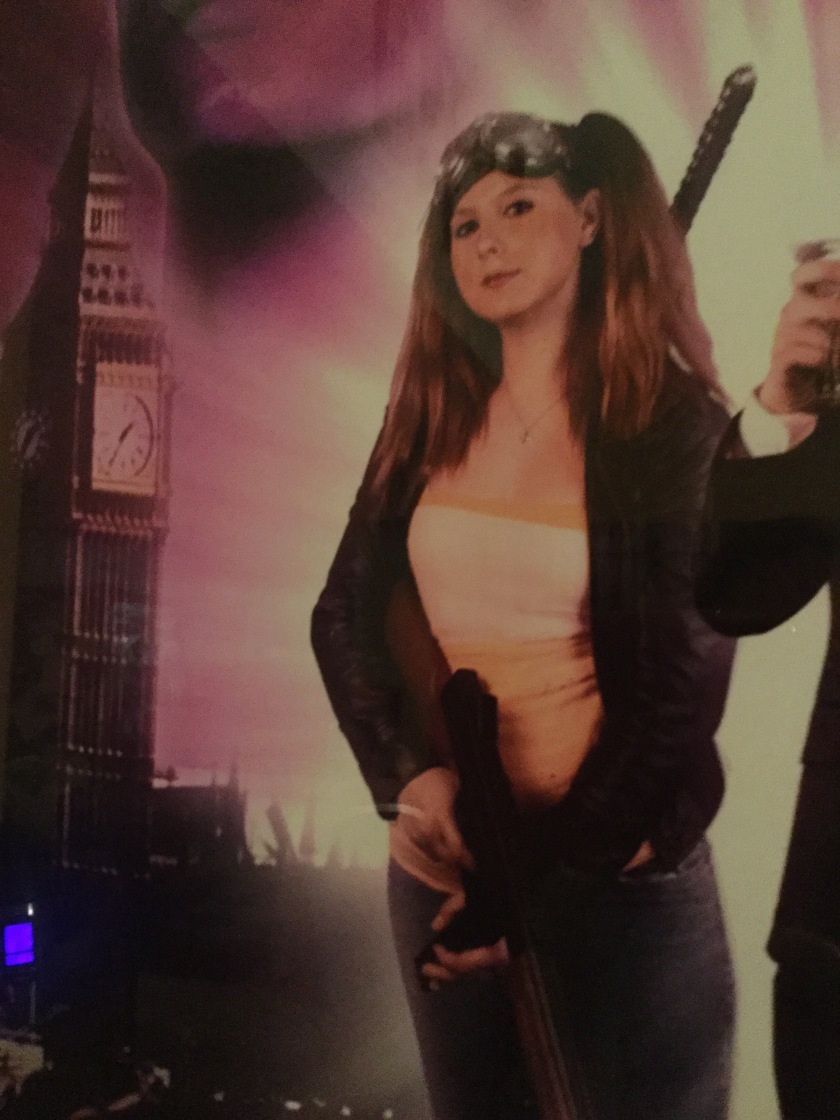 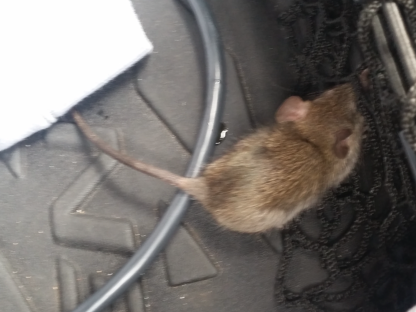 It was afternoon and I was finally recovering from my night of mouse terror. I asked my daughter Kat if she would go to my car with me to help retrieve my jacket that I had left in my hurry to escape the night before.
We opened the hatchback and there it was…cue the scary horror movie music and close up edits… It was the mouse just hanging out in my car as though it belonged there.
“Oh poor little mouse,” said my animal loving daughter, “I am sure he is much more afraid of us then we are of him.”
I must admit he was pretty calm, even posed for a couple photos as proof that he really existed.
I ran into the house and grabbed a large measuring cup and pot lid while Kat donned heavy duty gardening gloves. In spite of how it had terrorized me I could not bring myself to cause it any harm, so we relocated it to an undisclosed location where it could live free without frightening other squeamish humans.
We returned to the house proud of ourselves for our brave task, but I could not help but pondering where the mouse had come from. Were there other mice in my car, do they travel in packs….would my car ever be safe again?
Was this some evil scare tactic contrive to keep me from voting on Tuesday?

We may never know the answer to these questions, I just know that my sister Mary and my daughter Kat were now super heroes forever in my book. Two woman who were brave enough to face an evil mouse down and live to laugh about it.

Side note to all animal rights activists and PETA members – no mice were in any way harmed in the writing of this blog.

It started as one of those pathetic birthday Eve’s.. I was alone and having a totally selfish, silly, pity party so I decided to take a drive and ponder how much I hated my birthdays.
I was out in the middle of nowhere driving while on the phone with Don (blue tooth of course), when I thought I felt something at my feet. I brushed  it off thinking it was nothing, again I felt something running across my feet, again I ignored it. Then it happened, something crawled up to my shoulder and jumped on to my dashboard, a mouse…yes there was a mouse in my car….a mouse in my car!?!?!?
I must say I am humiliated and ashamed of my behavior after that. I screamed, found a place to quickly pull over and jumped out of my car in squeamish fear. “Are you sure it was a mouse” Don asked from the phone. “Yes” I screeched, it ran across the dashboard, “it was terrifying.”
I called my children who all offered to come to my rescue immediately, then remembered my sister Mary lived close by, “please hurry I cried bring your shotgun, “I’m on my way,” she said calmly, “but I think aiming a shotgun at your Hyundai would be the equivalent of dropping nuclear weapons on Luchenbach.” If you know my sister Mary, you would think she might be the last person you would call when faced with a possible mouseaacre. She is a beauty queen who always dresses to the nines, not the kind of girl you think could take on an evil attack mouse. But I knew the other side of Mary, the Mary who had run off rattlesnakes and scorpions with her heels without flinching. Yes she was my best hope for ridding my car of the evil rodent.
Moments later Mary arrived in her black SUV, like Wonder Woman she looked perfectly put together in spite of the late hour, with a flashlight in one hand and a broom in the other, the evil attack mouse was no match for Super Hero Mary. She prodded and hunted the mouse but it cowered and refused to show itself in her presence.
“But what if he is still in the car somewhere?” I asked from what I hoped was a safe 50 yards away.
“I will drive your car home,” Mary said without flinching, “I’m not afraid of no mouse.” So bravely she got behind the wheel of my car and drove it back to my house, while I nervously followed driving her car. I am certain that mouse was still in the car hiding, fearful of its fate if found by Mary.
We arrived back at my house shortly after midnight, “It’s your birthday,” Mary said when we arrived, we should celebrate, so we went into my house and toasted the day and our adventure with a lovely glass of wine and some Vermont cheese.
I quickly realized my earlier self loathing had been ridiculous, I was indeed a lucky girl, with family who would show up at anytime when I was in trouble. Shortly after Mary left Don called to check on me, I was fine I told him, but the car is in the driveway and somewhere in there lurks a mouse waiting for me to get back in so it can terrorize me.
Don promised a full mouse investigation as well as a thorough fumigation as soon as he got home, he even offered to let me drive his precious Thunderbird until he could present me with definitive proof that there were no attack mice in my car.
I went to sleep that night thinking of past birthdays both good and bad knowing that 2016 and my humiliating behavior when faced with a tiny mouse would make this for certain my most memorable birthday ever. 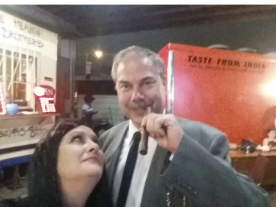 Halloween is the holiday that we love as children, and if we are lucky, never outgrow. It’s the one day a year that all our inner princesses, pirates, and superheroes get to come out to play. No one thinks twice on October 31 about seeing Dracula or Snow White driving or walking through the streets. It’s a fun fantasy day for all who want to participate.

It’s been years since Don and I dressed up for Halloween, so when I heard my nephew Jason’s band Tele Novella was playing in Austin we knew we wanted to go, but what to wear? My daughter Kat told me that Morticia and Gomez Adams were one of the epic love stories. With quotes like “Carra Mia, how long has it been since we last waltzed?” we knew they would be our alter egos for the night.

We did not get to Austin until nearly 11 pm and it seemed like the party surrounding 6th street had just started. Surrounded by zombies, a headless guy with his head in a jar, jellyfish, and our Gomez and Morticia.

The venue, Barracuda, was small but the space was well organized. Pool tables, a bar, some seating to include picnic tables and a couch, and of course a stage.

This was a release party for Tele Novella’s new album “House of Souls” so they were the last band to play. I was glad I had napped that day, because a midnight start up would have been rough for my half century plus body. But the excitement of the crowd made us feel young and energetic.

When they hit the stage the crowd gathered around like a rock concert. The band has 4 talented musicians who not only play well but entertain while on stage. They are having fun playing and you can’t help but getting caught up in the energy. The set was all original music with each song more brilliant than the last. In the audience, fans sang along and rocked to the sound that was filling the venue. We found a little spot to dance (yes it’s great dancing and waltzing music also). And like the rest of the audience, we were disappointed when the last song was over.

Afterwards we had a chance to talk to the band briefly. They had just completed a tour of the east coast to promote their new album and will be heading west this month. If you are in one of the towns they visit be sure to check out their great music and ability to entertain audiences of all ages. And if you want to keep that spooky Halloween feeling going a little longer, check out their music video “Trouble In Paradise.” Not only will this haunting melody stay with you but the special effects and talent of Natalie, Jason, Matt and Sarah will wow you.

We left Barracuda after 2 am, usually a pretty late night for us. Austin was winding down, couples were staggering through the streets, costumes still intact. The city was well behaved after a night of partying. My black wig was long gone (the victim of one too many waltzing dips).

Don/Gomez looked at me and asked the question “when was the last time we waltzed?”

“Hours,” I replied as I kicked off my heels and we danced our way back to the hotel.

“Who shall we be next year?” he asked.

I thought for a moment before replying,

“I think we have found our alter egos in The Adams, after all every night for them is Halloween, Carra Mia.”